English Folk Songs from the Hammond and Gardiner Manuscripts 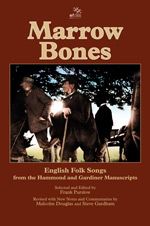 Marrow Bones was compiled and edited by Frank Purslow and first published in 1965 by EFDS Publications, a collaborative venture between EFDSS and Chappell. The songs were selected from the MS collections of Henry and Robert Hammond and Dr George Gardiner, made in the first decade of the 20th century in —mostly— Dorset and Hampshire. It was enormously influential on the growing folk song revival, and was followed by three further selections, The Wanton Seed (1968), The Constant Lovers(1972) and The Foggy Dew (1974).

In June 2007, EFDSS reprinted Marrow Bones in a completely revised edition, prepared by Malcolm Douglas and Steve Gardham with new notes, commentaries and bibliographies. This is available from EFDSS for £15.95 (plus £2 p&p): EFDSS online shop.

There is always much more interesting and relevant background material —some of it difficult of access to the average reader— than can realistically be included in print. It is also inevitable that there will be errors and omissions that need to be corrected as soon as possible.

It is the purpose of these pages to make available additions and corrections, and supplementary material, as an online supplement to the book. These will be added as they arise and as circumstances allow.