I like to listen to internet radio while I’m gaming, investing, or just surfing the internet, and so, a few days ago, as I was redeeming a bonus from Unibet, a song came that I instantly recognized. It was the Animals’ version of The House of the Rising Sun. This inspired me to put together a list of songs about gambling, as they give interesting tips and put one in the mood for playing.

The House of the Rising Sun

This was one of my favorite songs, at least the way the Animals did it. The true origin of this song is unknown, though there is some speculation that it was known by the miners back in 1905. The oldest published lyrics of the song in existence comes from 1925. The difference in the lyrics is simple – in the original, a woman laments her fate and her drunk husband, and, in the Animals’ version, the narrator is a man, talking about his family’s gambling history, and how it led him to become a gambler and a drunkard himself.

The King is hardly a folk singer, but it would not be right for him not to be on this list. Viva Las Vegas was released in 1964 (ask your parents). Since then it was covered, and we are fully aware of every charm and vice the Sin City has to offer. In fact, the Entertainment Capital of the world was so enamored with the song, that there is a bunch of Elvis impersonators, loitering on every corner, covering the King’s songs at bars and restaurants and even performing wedding ceremonies. The song perfectly captures the high the gamers get, surrounded by the lights, and taken in by the arm candy along with the prospects of winning big.

Another song that can’t be avoided is, admittedly, more country that folk, and, true enough, it might even be a little too ‘young’ to be considered a real folk song. Nevertheless, Kenny Rogers dished out some of the best advice regarding gambling in general. Simply put, if you want to game, you must do it correctly – which is to say that you have to determine when to go in, and when to get out. Be safe, don’t get caught up in the game, and be aware of when you should pack your stuff and leave.

This song is a real, honest, folk song, with no discernable author. It didn’t originally start as a gambling song, but the lyrics have been changed time and time again, and now one of the names for this song is Gambler’s Blues. 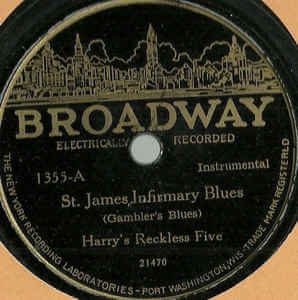 One of the reasons for the change in the lyrics could be the fact that one of its versions was done by Louis Armstrong, and he chose to record the song in New Orleans style at the time. By that time, the lyrics already gave hazy meaning. The latest versions suggest that the narrator is devastated at his beloved’s health to such an extent that he plans his own funeral, complete with many symbols of a life of sin, gambling included.

Nowadays it is easy to make a compilation of your favorite songs using various internet services, some free, other not. I know very well which songs will be on my list for some time, especially during game nights.