It is with immense sorrow and sadness to announce the death of the great Scottish singer and writer Michael Marra, RIP. 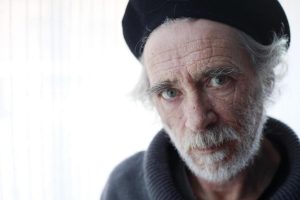 Michael passed away only a few days ago after a long battle with cancer. As many of you will know, Michael has played around the area in the past and was an annual guest artist at The Rock @ Maltby acoustic music club and before that at its previous venue in The Rockingham Arms in Wentworth village. Anyone who was fortunate enough by luck, recommendation or good judgement to see Michael will I’m sure never forget the depth, quality and sincerity of his performances and his peerless song writing. The first time I saw Michael perform some years ago, I like many, didn’t know quite when to laugh at the deadpan Dundonian’s lyrics or whether it was okay to cry as his achingly beautiful yet sparse verses tore quietly at ones emotions. I think we know that now. Michael Marra. A magician of a songwriter, a magnetic on stage presence, a good friend to all who knew him and a truly great Scotsman. With a voice as distinctive as a Keith Richards guitar riff, and with a complexion and talent the two of them shared, we were all so very lucky to have seen him play locally.

Tributes have been recorded by many significant people from the world of music and theatre. Eddi Reader wrote: “God bless Michael Marra, songwriting GENIUS and wonderful, wonderful man. So kind to me, my heart is breaking dear God.” Donald Shaw, artistic director of Celtic Connections, said: “It’s really sad news. He was just one of these really warm, generous people as a human and musically as well. He just had that great understated way with lyrics and songs, and there was so much depth in his song writing in a way that was a little bit too left field of mainstream to connect with the whole country. But I really do feel that he was so close to being an iconic artist in this country, and that’s the thing, ironically it will be from now what a great writer he was. He was also a big part of encouraging young musicians, always giving to people; he was just recently talking about being in the jail in Dundee and teaching songs to inmates.”

Michael was much more than a singer/songwriter, but what a singer/songwriter he was! He wrote plays, music and even composed an operetta, If the moon can be believed. Not bad for a wee local boy from the Lochee district of Dundee who’s first live performance back in the 50’s was in the National Cash Registers factory social club. An acquaintance of mine who is a very well-known singer and writer has only three pictures on the wall of his all-time heroes of music. Bob Dylan, Tom Waits and Michael Marra. If I can borrow briefly from Michaels Dundee deadpan humour, I’d say that Bob and Tom are lucky to be in such good company. 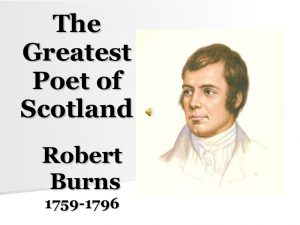 One of Michael’s greatest influences was Robert Burns. When asked in a radio interview some time back if he felt that he was trying to walk in Burns’ footsteps, Michael modestly and typically said he thought he wasn’t good enough to even clean Robbie’s’ footsteps… but that’ll be a matter of opinion then Mike? If anyone out there has been unfortunate enough to miss Michael Marra and his music please let me point you to a YouTube clip of Michael performing Burns’ Green grow the Rashes at Celtic Connections 2009. Sublime and typical. Take some advice and download Michaels back catalogue. I guarantee you’ll be moved.