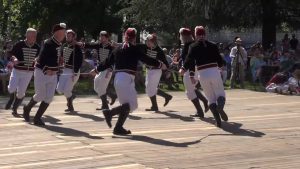 Dancing with swords is an old tradition in Yorkshire, probably originating as a part of ancient rites performed around Plough Monday to summon a fruitful harvest. The variant of this traditional dance unique to this area is Longsword, also known as ‘Hilt and Point’, which is usually danced with 6 or 8 dancers. At old times, almost every village had their own dances, but only a few remain today. One of the few truly traditional teams in the country, with a history stretching back at least 130 years is the Handsworth Traditional Sword Dancers, performing every year on Boxing Day and at Christmas. Boxing Day became a traditional day of the dance in 1963.

You can also see their performance at other folk events throughout the year. Last year, they performed alongside teams from across Europe at the Zwaarddanstreffen festival, an international sword dance festival taking place in the Belgian city of Sint-Niklaas.

The exact year when the club was founded is not known, but there are records that it existed around 1870 and possibly much earlier. The tradition originated in Woodhouse, a village two miles from Handsworth, and moved to Handsworth around 1890, because the majority of members lived there. At the time, the team was captained by Harry Siddall, one of four Siddall brothers who became sword dancers. Cecil Sharp, founder of the English Folk Dance Society, saw Handsworth dance in 1913, taking notes and photos and recording the words of songs, which he included in Vol. 3 of his Sword Dancers of Northern England. Around 1926, the captaincy was passed to Harry’s son Billy Siddall.

The dancers wear dragoon-type military uniforms and dance with rigid swords around one metre in length. The dance lasts for about ten minutes, with dancers joining to form a complete ring shortly after the beginning. In this formation, each dancer holding the sword point of the dancer on his left, they perform a series of fast-paced, intricate ‘figures’, ending with a ‘lock’ of enmeshed swords, which is then held aloft by the captain.

If you want to join this proud club with the long history, keep alive the famous local tradition and learn this challenging and beautiful ancient skill, the club is looking for new dancers all year round. Training takes place in the Burton Street Centre, Sheffield, on Wednesday evenings from 8pm to 10pm.